Wow ...
its bin a good since i have uploaded any comic strip or full comic here ... ups.
well for those who are still watching this (or still have me/this LJ of mine in thier list) ...
I don't really know when i can come back to making some lil comic strips.
since Feb last year i was working at an animation/cartoon studio, published some comics,
started my study on Grafik Design and doing more new comics.

one of which is calles
"THE NEW RETRO RENAISSANCE"
a 6 pager vertical comic i did for a german mag that will be published soon
and by luck and my buddy Ralph Niese this will also be published in
POPGUN #4 by IMAGE COMICS !!!! (wow)
Ralph did some stuff in the first two Popguns.
he is helping me out with cool colors and bringing it horizontal and into 12 pages.

so thats the most for now and i guess if you still like my stuff
you should add my 'normal' LJ account where i update far more often and also show new illustrations and pages:
http://johnnythunderz.livejournal.com/

so perhaps we see eachother there with a cold beer and some Rock n Roll :D 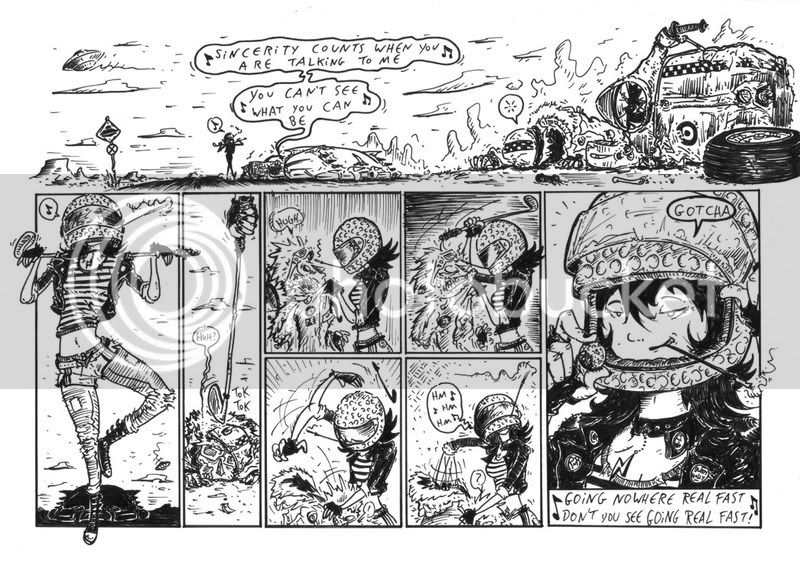 crash metro comix aint dead ... i just had to pause it again because of all the other projects going on.
i did this for a comic newspaper but it didnt make.

and just for the info, this really happened! and back then it was kinda funny ... but somehow not everybody gets it.
oh well, its one of those strips again...

http://ataripunk633.deviantart.com/art/CRASH-METRO-COMIX-Nr-22-67502478
after seeing another punk cover with a sonic youth 'hommage'
i did this one with some changes n extras but still sticking to the original by Raymond Pettibon.

ok, firtst of, a sorry that i can't keep up doing comics on a regular basis cause of the lack of time.
i wish i could but at the moment this is all i can do.

but its not like i have done nothing!
i took part at a compilation comic book and this is geting publisged in June!
this is no fanzine but a real publisher!
this is the first page of the 6 pager i did for that book:

and this was my 'promo-pic':

some weeks after i got this good news i took part at another competition for a ongoing comic on DeviantArt.
titel:
*BEACH BLANKET BLOODBATH'
http://beachblanket.deviantart.com/
this comic idea was created by Andrew Barr who is the creater of the characters.
http://sagg.deviantart.com/
actually this comic is a SpinOff from his 'SOMETHING-A-GO-GO' comic
http://www.somethingagogo.com/

this ongoing comic is a small contest between a few DA artists
there is no storyline and each page is a random orgasm by the artist himself.
so, these are the two pages i did

IT WAS SAID
"This kind of stuff confuses me as much as it angers me. I know it's been going around for awhile but it shouldn't be old news until it stops."
...
ALL THE OTHER COPY CATS
http://sirive.livejournal.com/146743.html

see you all guys later!